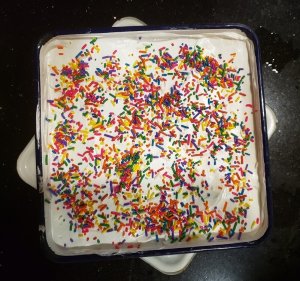 Before you say anything – yes, I know that this is a baking website and this is not a baked good. Nevertheless I am including the recipe here due to popular demand. Patshkerey is served on Shavuot in the Shottland family but nobody complains if it shows up at other times. It consists of a layer of vanilla pudding between two layers of tea biscuits dipped in milk, then a layer of  meringue frosting and sprinkles on top. The name originates from Yiddish: “Patshke is most often used to describe a kind of fussy, painstaking cooking”. But isn’t everything about Shavuot like that? Since the meringue layer is not baked it is not very stable and tends to become watery and unattractive by the next day. This is why I prepare it using the swiss method, which adds an extra step of warming up the egg whites and sugar in a double boiler until the sugar dissolves. The resulting syrup is whisked until a stable foam is formed. Patshkerey is made in a rectangle pan of about 8″ by 12″.

For the tea biscuits layer:

For the pudding layer:

For the meringue layer: